Data Breaches in the USA – Is your business next?

The U.S. Department of Health and Human Services maintains a database that tracks every data breach of medical records where more than 500 records have been compromised. SafeticaUSA reports that, during 2016, the data breaches were caused by improper disposal of memory storage (2.3%), loss (5.4%), theft (19%), hacking (31.8%), and unauthorized access/disclosure of information (41.5%) by employees, which happens sometimes by accident.

Misuse of this information obtained by a data breach is rampant. Criminals can use this personal data in many nefarious ways including blackmail and identity theft. Businesses that do not protect personal and private data are liable for its misuse. They can face fines and civil lawsuits in the multiple millions of dollars.

The SafeticaUSA study noted that the average cost for a single data breach is $7 million and that 100% of businesses share business data in ways that are not safe. When employees leave a company, 87% of them take company data with them increasing risk exposure. 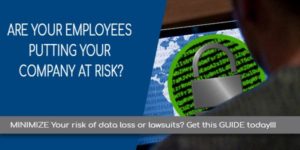 In the SafeticaUSA study of medical record data breaches, which reviewed the occurrences in 2016, California was the state with the largest number of incidents, followed by Florida, Texas, and New York. Indiana came in fifth place by having 12 major data breach incidences during 2016. In terms of the number of compromised private records, the state of Indiana, with 257,174 records breached, was in tenth place on the list of states with the highest number of data breaches.

Data breaches are a serious problem that puts every business at risk. Personal medical records are very vulnerable and the dangers are increasing. Proactive strategies to reduce this risk include conducting a data security Risk Assessment, implementing a data loss prevention solution, and advocating that the best practices are used for data security by affiliates, contractors, and business partners.

Contact Sentree Systems for a Risk Assessment to improve security and reduce the chance of a serious data breach.

Thank you for Downloading:

Top 6 Things to Do if You get hit With Ransomware!!

Your Guide is on it's way!!